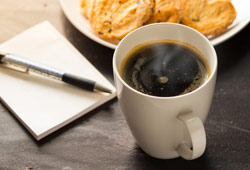 Decaf coffee can be a lifesaver for individuals who want to enjoy a cup of their favorite coffee late in the day, but still want to be able to get to sleep that night. But what, exactly, is decaf coffee, and how is it created?

Technically, coffee and coffee beverages cannot be classified as “caffeine-free” or “naturally decaffeinated” since the original, unprocessed coffee bean naturally contains caffeine. Decaffeinated beverages like decaf coffee have had their caffeine artificially removed. This does not mean, however, that they will then be completely free of caffeine. According to current U.S. regulations, at last 97 percent of a beverage’s caffeine must have been removed for it to be called “decaffeinated.” European standards are generally a little stricter, but they do not require 100 percent caffeine removal either; that is virtually impossible.

The processes by which this caffeine is removed can be divided into two separate categories: direct and indirect. Direct decaffeination allows the process’s solvents to directly soak the caffeine out of the beans. Indirect decaffeination, on the other hand, steams the beans, collects and condenses that steam and then removes the caffeine from the condensation. In both direct and indirect processes, the final step is to allow the beans to soak in the fluid after the caffeine has been removed from it, preserving as much of the original flavor as possible.

Solvent-based decaffeination is one of the oldest decaffeination processes. It relies on some type of chemical to leach the caffeine out of the coffee beans. Originally benzene was used, followed by TCE and then by methylene chloride. Now, however, most processors use only ethyl acetate due to health concerns about the other solvents.

Carbon or charcoal filters can also be used to remove caffeine. They require only water to function, with no additional chemicals necessary. Another process, known as supercritical carbon dioxide, uses highly pressurized carbon dioxide to remove the vast majority of the caffeine the coffee beans contain. Finally, the relatively new triglycerides method uses coffee oils obtained from used coffee grounds to pull the caffeine out of the beans. The process, which is thought to preserve the most coffee in the decaffeinated beans, receives its name from the triglycerides the coffee oils contain.

Keep in mind, as well, that you can reduce the amount of caffeine in your diet without actually drinking decaf coffee simply by selecting coffee made with certain types of beans. For example, Robusta beans tend to contain twice as much caffeine as Arabica beans. Scientists are studying how to grow coffee beans with even less caffeine than Arabica beans, with promising results so far. Someday, naturally caffeine-free coffee may be a reality.